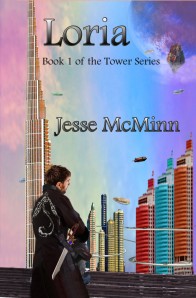 Kyle’s life had reached a standstill. He had no job, no friends and no interest in acquiring either. All he wanted was an escape from his problems… to be alone. So it was on a whim that he bought his ticket aboard the SS Caribia, a small, cheap cruise ship headed nowhere.

He never could have foreseen what would soon take place—the fierce storm, the accident that threw him to the waves. Now he finds himself in a strange new world, one he doesn’t understand. A world where inhuman creatures live and study the secrets of magic, and golden ships sail the skies. Where armor-clad adventurers travel the world and battle monsters in search of fortune and glory.

With the help of his newfound friends, Kyle must come to terms with this fantastic world, unravelling the mystery surrounding his arrival and learning of his own newly awakened abilities. But he isn’t alone. There are others, powerful enemies who somehow know of his origin, and who are willing to do anything to capture him. He needs to find a way home—and fast. But does he even want to?