Louis K. Lowy’s stories and writings have appeared in numerous publications including Coral Living Magazine, New Plains Review, The Florida Book Review, Ethereal Tales, Bête Noire Magazine, Pushing Out the Boat, The Chaffey Review, and The MacGuffin Magazine. He is a recipient of the Florida Individual Artist Fellowship. His humor poem “Poetry Workshop” was the second place winner of the 2009 Winning Writers Wergle Flomp Contest.

Louis moved from Pittsburgh, PA to South Florida at the age of seven and has lived there ever since. Before becoming a full-time writer, Louis was a professional firefighter. He also played bass guitar in original bands, including Hemlock, whose recordings for Warner Brothers Records included the dance hits “Disco Break” and “Body Rhythm.” Google Hemlock Disco Break for info and YouTube clips.

Louis has said, “I always loved writing. In the many bands I played in, I composed nearly all the lyrics. It was a natural progression to move into story writing. Notice I didn’t say ‘easy’. It’s a struggle everyday to find the right words to match the right thoughts. Most of the time – to my disappointment – I fail, but every once in a while I get it right. When I do, I get nearly the same thrill I did when I heard “Disco Break” on American Bandstand, or when I was on the fire department and we helped to jolt a heart into beating again.

He resides in Miami Lakes, FL with his wife, daughter, and their two cocker-terriers, Huey and Dewey. They have a son studying Asian Literature in Tokyo. 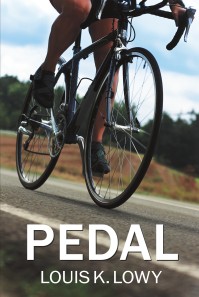 Pedal, a masterful piece about the human spirit